The northeast had been blanketed by a slow moving snow storm which dumped from a foot to nearly 30 inches of dry white powder and turned interstate highways into four-lane slip-n-slides.

The meandering road through Bear Mountain, in the lower Hudson River Highlands just south of West Point, provided a beautiful vista of snow-covered forests dotted with frozen lakes. But the drive itself could be tricky since the black-top was now white and more suited to sledding than driving. And it was getting dark, which meant Bambi and her cousins would be out mindlessly foraging in the frozen wilderness. 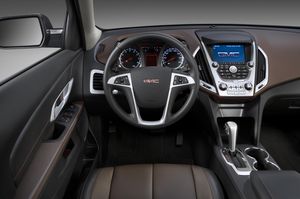 I rounded a Highlands curve at 1,200 feet in a GMC Terrain and was enjoying a great view of the valley below, leading into Seven Lakes Drive when I spotted three deer about 100 feet ahead walking towards me in the left lane. I swerved to the right – hoping the deer wouldn’t bolt, hoping the 18-inch wheels would hold onto the snow-blanketed roadway, hopingGeneral Motors knew how to design all wheel drive, and hoping I wouldn’t wind up in the trees below – and rolled on past, wishing the Bambis a Happy Meal somewhere much hotter.

After that, I could lean back in the heated leather seats, look through the panoramic sunroof at the snow covered hills around and above me, crank up Miles Davis on the CD player and enjoy the ride. Snow covered forests and frozen waterways are gorgeous if you’re not dodging deer. 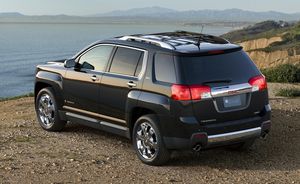 It also helps if you’re in a vehicle which can provide a comfortable sojourn while handling bad weather. In this case the ride was provided by the 2010 GMC Terrain, General Motors’ entry into a select, small-SUV market dominated by theNissan Murano, Ford Edge, Hyundai Santa Fe, and Honda CR-V. That’s a pretty tough market, more or less created by the Nissan Murano and expanded by the eclectic Ford Edge. The Murano is particularly versatile in bad road conditions and the Santa Fe rivals the smaller Lexus for inside comforts. But the new GM, which has long prided itself for a line of big, powerful, pick-up trucks, belatedly decided it would not cede the small SUV market to everyone else. Hence the Terrain, an unmistakably arrogant, $30,000, GMC mini-truck with the ride and comforts of larger, more expensive SUV models.

GM’s SUV line eschews what it’s designers consider the “soft” curved, flowing lines of most of the mid-sized competition, and strut a distinctive, square-jawed, rather boxy shape – though its sharp angles have been rounded off somewhat. GM design chief Ed Welburn wanted its SUV line to have its own distinct look, and he has managed to distinguish it from the regular SUV pack. 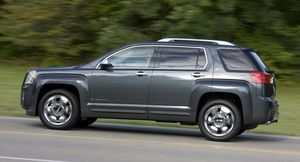 Under the hood is a 3.0-liter V-6 engine cranking out 264 horsepower and 222 pound-feet of torque, which is more than enough to keep the Terrain ahead of traffic while towing 3,500 pounds. There is a base model with a 2.4-liter, four-cylinder engine cranking out just 182 horsepower and an anemic172 pound-feet of torque. While the smaller engine is adequate, the base model Terrain is sluggish when accelerating, the engine strains at highway speeds, struggles going uphill, and tows just 1,500 pounds – a ton less than its bigger brother.

The difference in price, at about $1,500, is relatively low for similarly equipped vehicles. There is a greater difference in fuel economy, however. The four-cylinder Terrain gets an EPA estimated 22 miles per gallon in city driving and 32 MPG  on the highway, while the six-cylinder model gets 17 miles per gallon on city streets and 25 on the highways. Both models feature a six-speed, smooth-shifting, automatic transmission

The interior has its strengths and weaknesses. The décor is heavy on plastic which, on the doors, can look cheap in what is otherwise an upscale vehicle. The test models did not have navigation systems – something motorists might expect in this price range – but it does provide GM’s OnStar communications system which provides turn-by-turn directions. While that is a workable system, you are listening to a robot speaking from thousands of miles away telling you where to go and, since there is no map to look at, you haven’t a clue as to where you are. For some motorists, a map is a needless distraction and being told where to go works just fine.  For those who need more, a navigation system with a 7-inch touch-activated screen is available for about $2,100.

The Terrain does have an easy to use Bluetooth cell phone connection, however, with the sound emanating from the eight Pioneer speakers. The Terrain is heavily baffled, keeping out wind and roadside noises regardless of speed and enabling the sound system to envelope the passenger cabin with in a moving wave of music. The standard system comes with XM satellite radio, a single disc CD player, a USB port, both iPod and MP3 connections,  and a 10 GB hard drive to store your music or video library.  There is also an option for a rear seat DVD system with two separately controlled screens.

There is ample leg room in the back for the average six-footer. But if the passenger is in the NBA, the rear seats are built on rails and can slide back another eight inches. The mobile leather seats are a useful innovation whether one is transporting extra cargo or extra large friends.

The small SUV segment is a tough market to crack. But the late entry Terrain sold nearly 100,000 in the first six months of this year, an indication that a lot of motorists like the way in rolls.