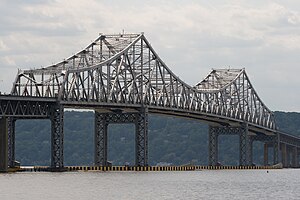 Governor Andrew M. Cuomo on Monday, October 10, 2011, announced that he has asked the federal government to expedite the review and approval process to allow work to begin on the Tappan Zee Bridge project. The Tappan Zee project represents a multi-billion dollar investment that will create tens of thousands of jobs and restore a critical part of the Northeast’s transportation infrastructure.

President Barack Obama launched a competition where states could submit their high priority, job-creating projects in order to win expedited federal approvals, and New York submitted the Tappan Zee project in to the competition.

With an expedited federal review of the Environmental Impact Statement (EIS) and the processing of certain permits, the Tappan Zee project could begin as early as next year, potentially creating more jobs than any other infrastructure project in the country.

Senate Majority Leader Dean Skelos said, “I urge the federal government to expedite approval for this important project which will create tens of thousands of jobs. Major investments in infrastructure are exactly what New York needs to jumpstart our economy and restore safety to heavily traveled bridges and other arteries. I commend Governor Cuomo and Senator Fuschillo, the Chairman of the Senate's Transportation Committee, for their leadership on this critical project.”

Assembly Speaker Sheldon Silver said, “With support from the federal government, New York State will be able to begin work on the Tappan Zee Bridge, ensuring this critical part of the Northeast’s infrastructure remains safe and reliable. Investments of this size have the potential to transform the region’s economy, create jobs, and renew confidence in our state’s economic revitalization. Governor Cuomo has shown true leadership in rebuilding New York’s economy and I look forward to continuing to work together on critical infrastructure projects and creating jobs in our state.”

Built in the 1950s, the Tappan Zee Bridge is a critical link in the regional transportation network carrying Interstate routes I-87/I-287 across the Hudson River, connecting Rockland and Westchester Counties in southeastern New York, approximately 15 miles north of midtown Manhattan. This bridge connects I-287 in New Jersey to I-95 in Connecticut for access to the Northeast, New Jersey and Pennsylvania and carries a high percentage of trucks. Approximately 135,000 vehicles cross the bridge daily with upwards of 160,000 vehicles on some weekends, with a total of approximately 45 million vehicles in 2010.

Over the last twenty years, the Tappan Zee has shown significant deterioration. Further, with seven narrow lanes and no safety shoulders, the Tappan Zee has an accident rate double the rest of the New York Thruway system. The bridge also has serious vulnerabilities to extreme events such as severe storms, ship collision and earthquakes. The loss of the Tappan Zee, or reduction in lanes or load limits, would over-tax alternate routes and have a catastrophic economic impact on the region.

The Tappan Zee project has the potential to generate more jobs than any other infrastructure project in the nation. According to the Federal Highway Administration (FHWA), transportation infrastructure accounts for 11 percent of the nation's economic activity. For every dollar invested in highway construction, the overall economy receives $4.87 in economic benefits – nearly five times the return on investment. Highway construction also supports thousands of jobs. FHWA estimates that every $1 billion in highway construction supports over 30,000 employment opportunities. The Associated General Contractors of America estimates that $1 billion invested in non-residential construction will create or sustain 28,500 jobs: one third of those jobs will be on-site construction jobs, one sixth will be indirect jobs from suppliers of construction materials and services and about half of the jobs would be created when construction and supplier workers and owners spend their additional incomes.